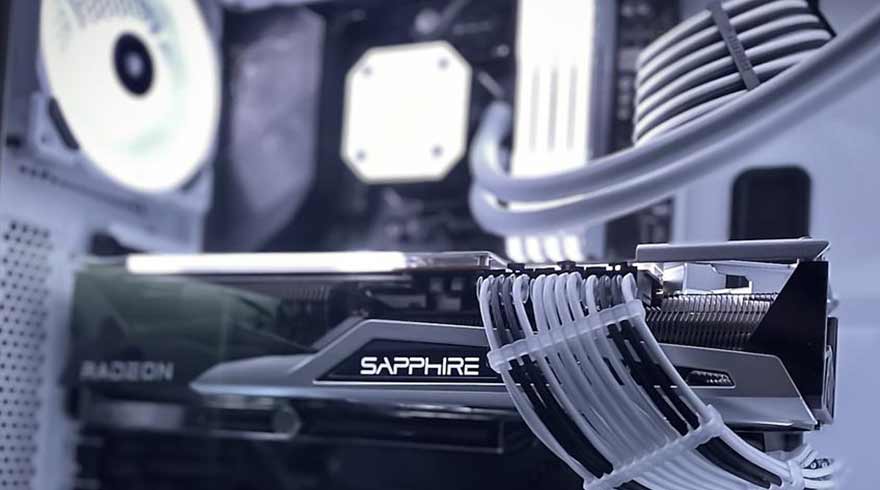 When it comes to building a new gaming PC (or any PC in general), choosing the right parts is always challenging. It is the same for the graphics card, as it is one of the most crucial parts of your PC and can make or break a great PC overall.

Choosing a graphics card could be simple if only NVIDIA and AMD had been building the graphic cards. But other computer parts manufacturers are building excellent graphics cards based on the silicone from team green and team red. These after-market cards are always a better choice because they bring a greater value to the table when compared to the graphic cards directly from NVIDIA or AMD.

You not only get better power delivery and thermal performance but also other features like cool-design aesthetics, RGB lighting, a wide range of connectivity, different form-factor sizes, and even liquid cooling. All these features enable you (the consumer) to find the perfect graphics card for your build.

All these choices available on the market make it a bit hard to decide which graphics card you should get for your next gaming pc build.

In this article, I have curated this list of the best graphic cards for all types of builds based on the Ryzen 7 Series CPUs. These graphic cards will not only ensure the best gaming performance and deliver the highest frame rates, out of the box, but also chew through those 4K renders and lens blur filters without a problem when it comes to productivity.

This graphics card from Asus features a matte black look with an aluminum housing that feels sturdy and quality. This card is going to take 3-slot space in your PC case. This card has RGB lighting, but only in the TUF Gaming logo and a stripe right below it. This design choice looks excellent and minimalistic, but I would have liked to see the GeForce RTX light up instead.

The IO on this card is custom and features two full-size HDMI 2.1 ports as to only one HDMI 2.1 on the Founder’s Edition card from Nvidia and three full-size DisplayPort 1.4 ports. This means that you can hook up to 5 monitors to this graphics card. It is not just totally possible but an enjoyable experience with the graphical power this graphics chip provides.

The dual axial fan technology on this graphics card is not unique but very clever, with the middle fan spinning in the opposite direction to the outer fans. This design not only improves the airflow and thermal performance of the graphic card but also reduces turbulence and vibrations caused by the fans themselves. The fans also turn off when the GPU is under 50℃, and they stay relatively quiet under load. This near-silent operation makes it an excellent choice for well-ventilated PC cases which have fewer acoustic-dampening materials.

Asus has also implemented a dedicated VRM heatsink along with a Maxcontact heatsink to aid the GPU cooling. Maxcontact is Asus’s way of saying a super flat and smooth surface that makes excellent contact with the GPU and dissipates heat more efficiently. The backplate on this GPU is partly ventilated, with a vent at the rear end, which also helps it stay cool.

This graphics card from Asus has 10GB 320-Bit GDDR6X memory, 8704 cores, 272 texture mapping units, 96 ROPS, 320-bit bus bandwidth, and a core clock speed of 1440 MHz. You can change these speeds with just the physical switch, which changes the bios from quiet to performance mode, and you are going to get ~1740 MHz of boost clock speed.

In short, this graphics card from Asus is not the cheapest, but it is smaller in size and runs significantly cooler which not only gives you a lot of headroom for overclocking but is also an excellent choice for small form-factor builds.

It is a very clean-looking card with its modern monochrome backplate design (with RGB) and a very minimalistic Sapphire logo on the top of this graphics card. This card is a big one and is going to take 3-slots on your motherboard and system.

Sapphire Trix coolers have had a brand new redesign for the 6000 series of graphics cards. The fan blades are not only larger, but also denser with a WaveFin design, which means that on the slower RPMs, this cooler can push a lot of air over the heatsink to keep the graphics chip cool. And when under load, the fans do not make much noise either. The heatsink not only makes contact with the GPU but also with VRAM and power MOSFETs to keep the overall temps down.

The fans also feature a dual axial fan design where the middle fan spins in the opposite direction to maximize the airflow on the heatsink and increase thermal efficiency.

Taking a look at the specs, this graphics card is built on the AMD Radeon RX6800 graphics chip and has a base clock of 1825 MHz with a boost clock of up to 2170 MHz. It features 16 GB GDDR6X graphics memory paired with a 128 MB of L3 cache, 4608 shading units, 288 texture mapping units, and 128 ROPs. This card supports DirectX 12 and hardware-accelerated RayTracing with 72 individual RayTracing cores.

This card can handle up to 4 high-resolution HDR displays with 3 DisplayPort 1.4 ports and 1 HDMI 2.1 port.

The 6000 series graphics card has lots of features like smart-access memory, which uses the bandwidth of PCI-E gen 4 to give you access to the whole graphics memory. It means that you can fully utilize this graphics card with your AMD 7 series CPU and get up to 10% more performance out of this graphics card.

There are lots of other cool features in the Radeon Boost software like Anti-lag and AMD chill, and these features are only going to get better with time.

Overall, this RX6800 graphics card from Sapphire is not cheap or budget-friendly. And it does not have to be when you want absolute high performance from your system. With this graphics card and all the new technologies that AMD has developed for it, you can bet on the performance side of things with your new 7-series CPUs.

This card uses a factory-fitted close-loop water cooling system to cool the GPU dye and a beefed-up power delivery system to keep the card stable under heavy workloads and custom extreme overclocking profiles. Unlike most AIO graphics cards, this RX6900 not only uses a large 240 mm radiator but also has a blower-style fan on the graphics card itself for dedicated VRM cooling. The two 120 mm fans on the radiator do an excellent job of cooling the graphics card at slower RPMs and make very little noise when under load. You can always tweak the fan curve and make it more aggressive, so you get the best temps on the card at the cost of noise. The cooler uses 600 mm tubing, so you will not have trouble fitting this card and mounting the radiator in most medium to large-sized cases.

This card is pretty compact and takes only two slots on your motherboard, whereas some other cards can take up to 4-slots. This card uses three 8-pin PCI-E power connectors to deliver the 400 watts it needs when overclocking. The only thing this graphics card can not do well is the IO. It has only 1 HDMI 2.1, 2 DisplayPort 1.4, and a USB Type C port for displays and VR. I would have liked to see at least one more Display port on this graphics card.

Looking at the specs, it is built on the RX6900 XT graphics chip from AMD. It features 16 GB GDDR6X video memory with a base clock of 1825 MHz and a boost clock of 2250 MHz. It also features 5120 shading units, 320 texture mapping units, and 128 ROPs with 80 RayTracing acceleration cores.

When it comes to temperatures, this card is quiet and cool, at the same time. In my testing, this card runs at around 40 degrees when idle and can go up to 63 degrees when playing games and doing other graphics intense work on your computer. This all with very little to no noise coming out of the fans and the water pump.

All the software features of the Radeon Boost, like Smart Memory Access, work flawlessly with this graphics card. These features are only going to get better with future updates.

Overall, this graphics card from Asus is an excellent choice for anyone looking for the best graphics card from team-red, aka AMD. And with the liquid cooling and improved power delivery system, overclocking should not be a problem by any means. And the RGB looks slick too.

Since we are working with the AMD Ryzen 7 series CPU, the Asus RTX 3080 TUF is an excellent choice and hard to beat when it comes to the most bang for the buck. It offers plenty of graphical horsepowers and can run almost all games at a decent resolution while delivering high FPS. And by decent, I mean 2160 x 1440.

And if you do not want decent graphics performance and want the absolute best in both the raw performance and technology, the offerings from AMD deliver just that. The RX6800 and RX6900 are top-notch graphics cards, and they are a perfect match for AMD Ryzen 7 series CPUs.

With RX6800 XT, you will get a smooth gaming experience and FPS with hardware-level RayTracing Acceleration. It is true even at higher resolutions like 4K. And if you are an extreme overclocker, the RX6900 XT from Asus can keep up with its water cooling and improved power delivery. And is a perfect choice for VR.

The only card better than this is the Sapphire Toxic series, but currently, that is not available to purchase from anywhere. There is a great chance that I have overlooked a thing or two. If you are a seasoned PC builder (like I am), please let me know your thoughts in the comments.